This article is a stub. You can help Roblox Apocalypse Rising Wiki by expanding it.

The Apocalypse Rising 2 map is set on a remote island chain consisting of major and minor islets. Excluding the minor islands, as well as a few specific points of interest, the landscape is relatively uniform from island to island with a handful of terrain types. The map currently consists of three major islands (Barkley, Faris, and Halsey) and three minor islands (Albatross, Lulu, and Mackinaw). It has undergone many additions and modifications since its original release, with gameplay changing drastically upon each new iteration.

With the most recent Alpha v2.1 update, Albatross Island was added to the map, which includes a prison complex.

In general, the landscape consists of blocky, polygonal terrain that gradually changes in elevation, with the occasional steep cliff side. Structures exists throughout the map, with more clustered at marked towns and locations. Structure design is mostly uniform through the map with the exception of the minor islands having their own unique building themes.

The landscape can be mainly divided into 4 main terrains: plains, farms, forests, and the coastline. Additionally, a majority of the map is ocean, but it currently remains nearly featureless.

Plains (pale green) are generally flat and have intermittent trees and boulders, but also long stretches of open space. Farm fields (yellow, olive green) are also flat, but are abundant with hay bales or other features. Forests (dark green) are thick with trees, and tend to have more concentrated elevation variation compared to open plains. The coastline (also yellow) is often bare of any structures, natural or otherwise, and it's elevation tends to remain consistent, excluding cliffs. It has occasional sandbars here and there.

Some terrain exceptions include more developed areas, namely the Naval and Regional Airports, which feature long, flat stretches of pavement and are abundant with structures. Additionally, Mackinaw Island and the Volcano each have very unique terrain.

The map has a system of roads and bridges that can be traversed on foot or by car. Boat travel is also an alternative. Due to the size of the map, aircraft have been teased as a possible feature under consideration.

Barkley Island is the largest, yet most sparse of the three main islands. It's most distinctive feature is it's volcano, which gave it it's colloquial name of "volcano island". It connects to Faris and Halsey Island by road.

Faris Island is the smallest of the main three island. It is also the original island of the game, albeit with extensive changes since the game's alpha launch. It connects to Barkley and Halsey Island by road.

Halsey Island is about as large as Barkley Island. It contains the only inland body of water on the map, and is covered in the largest area of farmland. It connects to Barkley and Faris Island by road.

Albatross Island, also referred to as the "prison island", is the smallest of the minor islands. stub

Lulu Island, historically referred to as "monastery island", is one of the three minor islands on the map. It does not connect to another island by road.

The has 1 Police spawn, and 4 Militia weapon spawns.

Mackinaw Island, also referred to as "smugglers island", is the largest of the three minor islands. It has a drastically different setting and landscape than the rest of the map, with sparse tropical flora, dilapidated shanty structures, and hot springs strung about the island. It does not connect to another island by road.

The ocean spans more area that any one island, expanding past the map display. It is relatively featureless throughout.

The ocean has 1 marked location.

Screenshot of the first map] 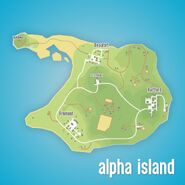 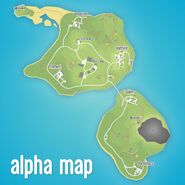 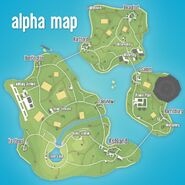 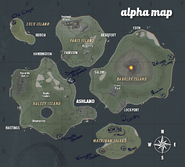 Screenshot of Alpha v2.0 map updates (4)
Add a photo to this gallery
Retrieved from "https://roblox-apocalypse-rising.fandom.com/wiki/Map_(Apocalypse_Rising_2)?oldid=95129"
Community content is available under CC-BY-SA unless otherwise noted.